This year the AAUW—TUS partnered with the League of Women Voters and the Women’s Commission to have an information table at the Tucson Festival of Books (TFOB). Thanks to Sue DeArmond’s offer, we took our material to her home to have her deliver it to our table early on March 15. She also loaned us some strong, large Bungee cords to hang our banner in the tent. Sue is with the League of Women Voters group (LGWV). Again, with Sue’s help we were able to organize our table with material from all three groups, and hang the banner well.

Both Saturday and Sunday were warm days for Tucson. The warm weather helped bring record number of people to TFOB and visit our table. AAUW—TUS also had pamphlets and information from the Tucson Young Women’s Christian Association (YWCA). We received comments from visitors that the information went with the booth’s theme, “Women’s Groups for Change.” The candy handouts also encouraged people to stop by!

We had a notebook for visitors to sign up for more information. Over the two days, we collected a total of 29 names. Our membership team will be doing some follow up on these names. We also had a visitor who advised she wanted to help with the AAUW Running & Winning activity.

Altogether, ten of our members volunteered to help at the table, including myself and Shirley Muney, who also volunteered for the Women’s Commission . We had a good mix of women helping each other, providing information and pamphlets to our visitors. With three groups and usually four people at the two tables, we found it better to help each other, if a break was needed. This was a good exercise to learn about the LWV, WC and YWCA.

If we choose to participate in the TFOB again, here are some recommendations:

Lois Sands Mitsch recipient Maria Mobasseri tells us about the STEM program that the LSM grant is funding for summer 2014.  Maria is at Parkland College in Champaign, Illinois and is the first LSM grant recipient for 2013-14.  The 2014-15 recipient will be announced August 1.

Thank you very much for sending me the link. We are starting our planning for local advertisement and awareness of the summer camp as well as recruitment of the girls into the program. We will keep you posted on our progress via pictures and videos.

Joan Donnelly gave a summary of our February 8 Fund Raiser Activity.  Total Funds raised for EOF was $2,855.00   This year’s fund raiser was one of the best in AAUW—TUS’ fund raiser activities.

Ms Kelly Fryer, Executive Director of Tucson YWCA gave a powerful presentation on YWCA’s work in the community.  YWCA Tucson’s statement of “eliminating racism, empowering women” is very similar to our AAUW mission and vision that our luncheon members discussed how we could work with YWCA.  AAUW—Tucson offered to take some of YWCA’s brochures and information for handouts at their information booth at Tucson Festival of books.  More information on YWCA Tucson can be found at:  ywcatucson.org

Membership Luncheon will be help on March 8, 2014 at Old Pueblo Grille on Alvernon from 11:30am-1:30pm. See the March Sentinel (members only) for lunch choices and reservations and speaker information.

On December 14, 2013 the branch membership held its Holiday Luncheon at El Sabbar Shrine. The Tunecatchers, directed by David Hernandez with Jane Rohwer at the keyboard, entertained with holiday music. 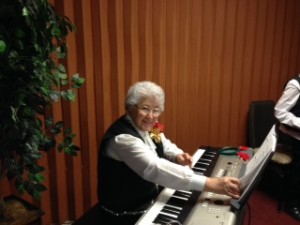 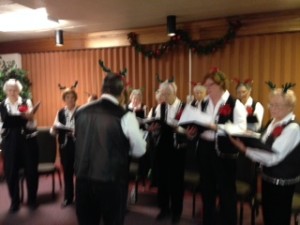 On November 20, 2013, Co-Presidents, Betty Jett and Nieves Miljure responded to an invitation from the Girl Scouts of Southern Arizona. This activity is called an Investiture Ceremony; one exercise to be held at Katherine Van Buskirk Elementary School. They accompanied Michelle Higgins, MS, Senior Director of Education & STEM Relations, Girl Scouts of Southern Arizona. At 1:30 pm., after school was out, the students gathered in the gym-cafeteria. While waiting for the event to begin, Betty and Nieves were able to meet and greet the arriving parents, some grandparents, and brothers and sisters. They noted that the young couple next to them had two daughters moving up from the Daisy level. Kim Flores, the leader for this activity advised that there are 44 students involved in this after school activity: 19 Daisies (K to lst grade); 15 Brownies (2nd/3rd grade); and 10 Girl Scout Juniors (4th/5th grade). The latter being the oldest of the group. Kim advised that the girls met and worked on projects each Wednesday for about 1 ½ hours.

After this traditional “moving up” to the next level was completed, the two younger groups of girls performed a skit with songs to celebrate. Some of the group participated in a “Gorp” assembly, putting together the gorp in a very traditional GS manner. Lastly, the girls all celebrated with their parents and shared their gorp treats, along with Nachos and juice.

The activity was a good learning experience and fun. It is good to note that the girls have many traditional Girl Scout songs to share in these types of activities.

AAUW Tucson Branch is proud to participate in community activities, and to see how we can help young ladies, have fun, and meet some of our team goals!