This scholarship is awarded, by application, to a deserving Native American woman who meets the criteria for being an awardee of the scholarship. The $2,000 scholarship is to be used for books and other expenses during the recipient’s first year in college.

This scholarship was originally established with a bequest of an AT&T Bond given to the Tucson branch in 1945 by Mrs. Nance with the stipulation that only the interest be used to assist Native American girls to get an education.  Over the years the fund has changed and grown.  More funds have been donated and today the scholarship is supported by investments and the interest is used to fund the scholarship.

Scholarship winners are invited to attend our end of the year luncheon in May where they are recognized and encouraged to further their educational goals.

KAYLA BAHE, 18, a Navajo, is the finalist and awardee of the our scholarship for 2016-17. Kayla gave us the pleasure of introducing herself as a member of her maternal and paternal clans. This is a reflection of her core identity as a Navajo and as such, she participated in the Navajo rite of passage to womanhood.

Kayla attributes her academic achievement to her great grandmother. Kayla’s standing as one of the top five students in her class is a testimony to her motivation. Her academic excellence is balanced by her team membership in volleyball and varsity basketball since her first year in high school. As Vice President of HOSA (Health Occupations Students of America) she prepares the agenda and conducts its meetings. Her membership in this club dovetails with her aspiration to become a health worker.

Kayla is enrolled in the University of Arizona’s College of Medicine’s Pre-Physiology program.

We wish Kayla continued success in her chosen career path.

American Association of University Woman – Tucson Branch annually awards a scholarship to a Native American graduating female student. Shania C. Pablo, a Pima, is the finalist for the award of $2,000. 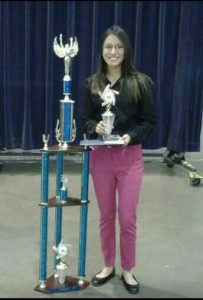 A chance selection of an sophomore elective, welding, proved to be a well spring of her artistic talent. Focus and attention to detail combined with draftsman’s skills yielded pleasure in effecting welds . Other courses taken were Advanced Placements. Advanced Placement courses can qualify for college credit. Her participation in Advanced Research Methods lead to conducting two experiments in both junior and senior years, She entered and won second place in the regional science fairs both years. One project was the how do emotional states effect sleep; the other how does the length of time using technology effect sleep. For both entries she personally received trophies and one big one for her school Tucson High.

Other activities include four year participation on the soccer team. Shania’s plans are to earn her welder’s associate degree from Pima and continue on to get an engineering degree from the University of Arizona.

American Association of Women Tucson Branch is proud to announce Shiniin Little-Sagg, a Navajo, is the recipient of the Hoppy Award of $1,000 for books and supplies.

Shiniin is a graduating senior from the Palo Verde Magnet School where she has taken advanced courses for four years. An attainment of 3.75 grade average is one of her many accomplishments. She was one of 69 graduates that were honored at a special assembly attended by all staff students and dignitaries.

In addition to her academic achievements she has contributed to the school’s community. Youth Empowered for Success has benefited from her work in a variety of settings. These activities include tutoring students at Wheeler and Booth–Fickett. You may have seen her welding a brush in the parking lot and the teacher’s lounge. The club hosted a teacher appreciation breakfast in between cleanup at a wetland. Other clubs she was active in are Venturing Crew and Superintendent Advisory Committee.

As a member of the National Honor Society she fund raised for the society. As a participant in the first TUSD Strategic Planning she experienced the value of Community action.

Since age fifteen Shiniin has stayed with her grandparents on the Navajo Reservation. (I wonder if I have seen her riding free on my visits there.)

Navajo tradition has been a deep source of her being rooted in nature and experiencing the value of community.

For the future she would like to harness her awe of nature and intellect into scientific research. She has been accepted into the University of Arizona which she will attend for two years. Then, she will transfer to UC San Diego which has a major study in nanoengineering (University of California, San Diego), her career choice.

Such a good start. We wish her well on her journey.